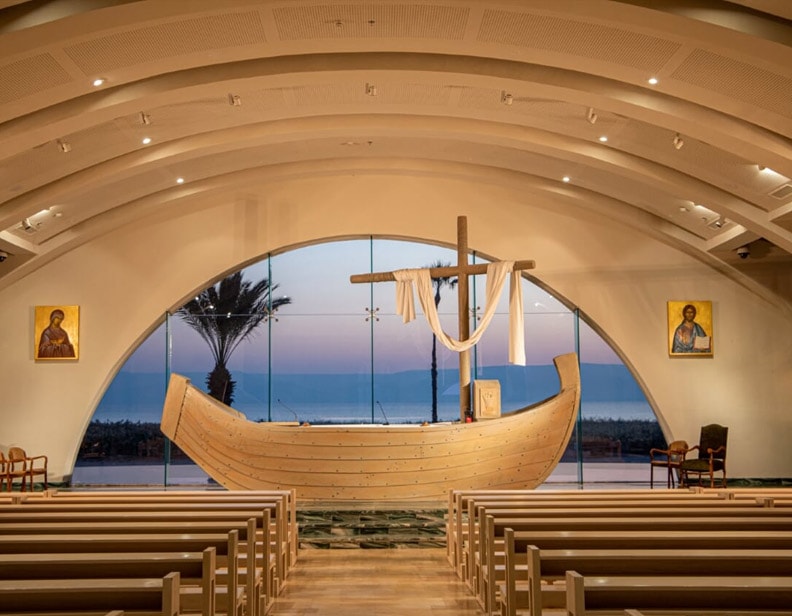 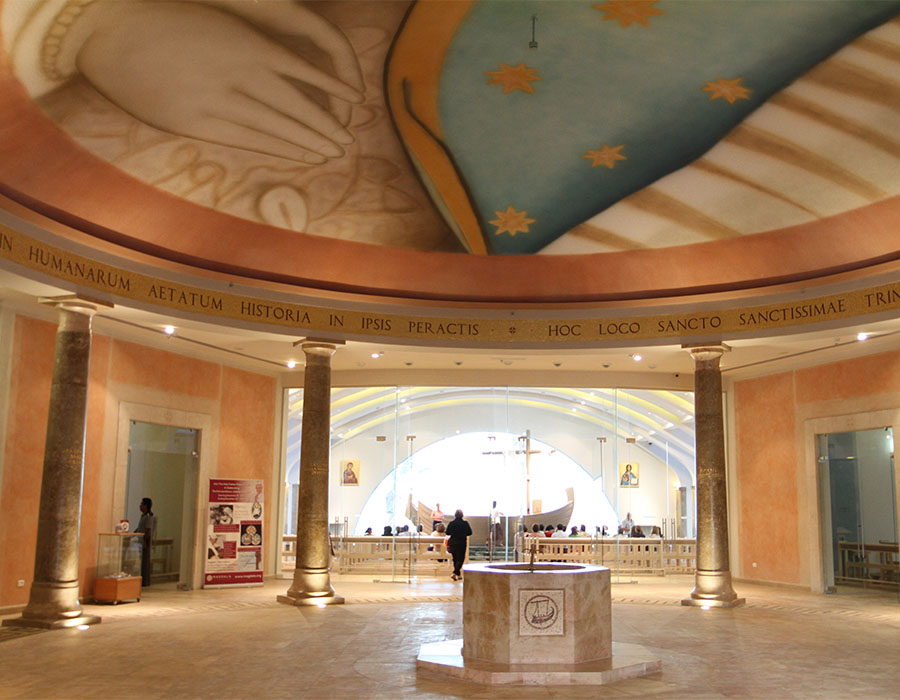 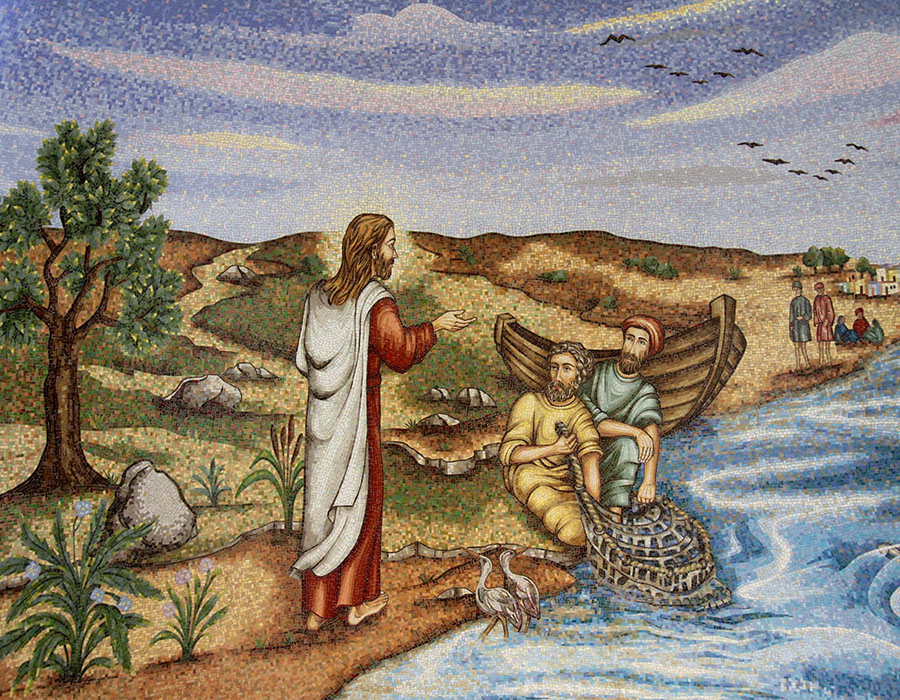 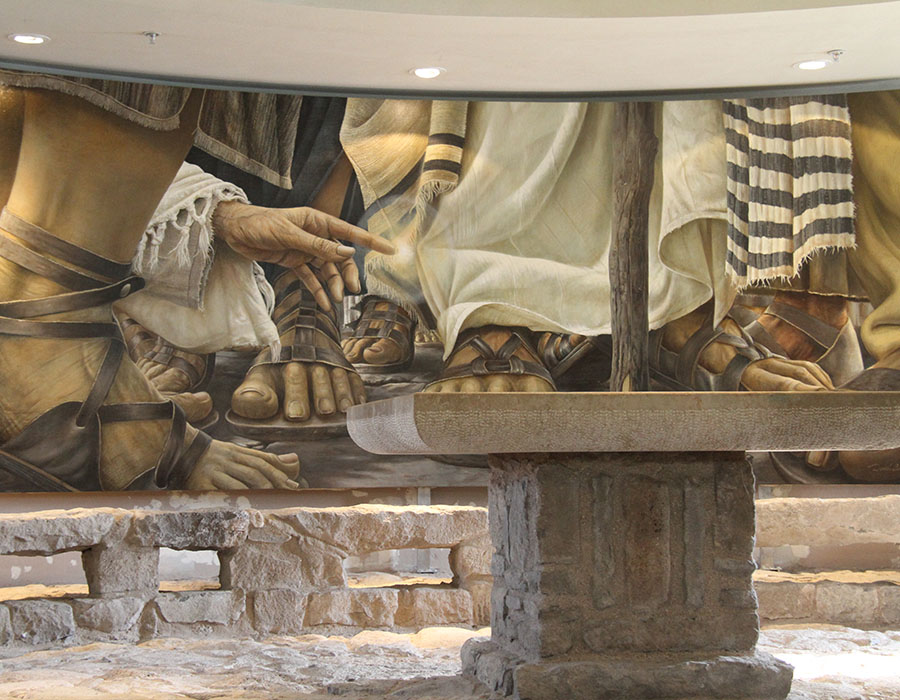 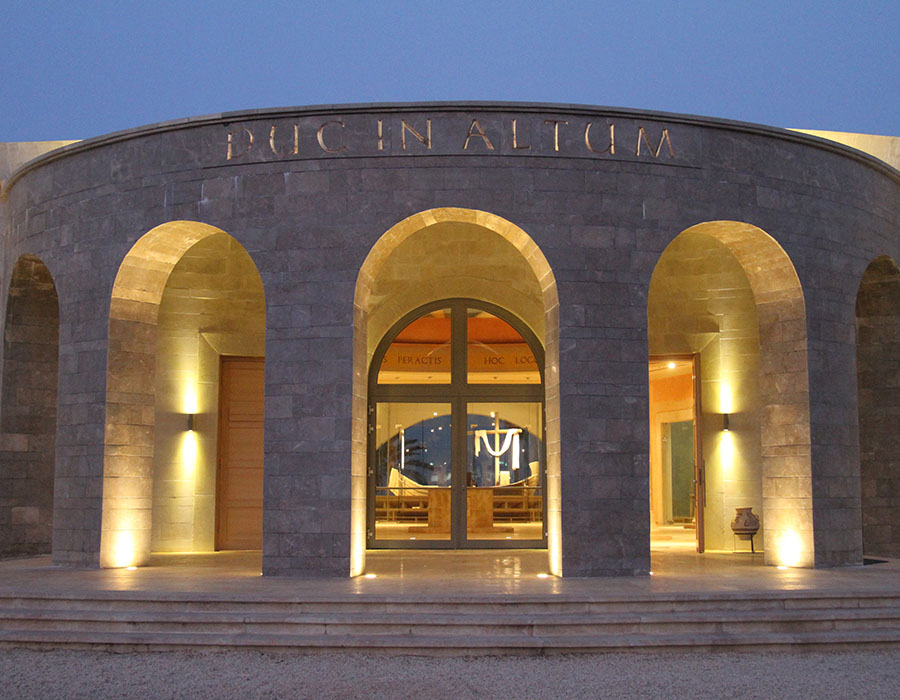 VISIT US
Duc In Altum

Duc In Altum provides a place for prayer, teaching and worship for Christians of all backgrounds and denominations. The building is dedicated to the public life of Jesus, his transforming encounters, and honors the women of the Bible and all women of faith through its Women´s Atrium.

Duc In Altum draws its name from Luke 5:4 where Jesus instructs Simon Peter to “launch into the deep” or “put out into deep water.” The edifice is composed of six chapels, including the main boat chapel, four smaller lateral mosaic chapels, an atrium dedicated to women as well as the lower level Encounter chapel with an impressive mural. Although a building of contemporary design, within it, visitors can find many details connecting the Christian faith to its Judaic roots as well as to ancient Byzantine traditions. Highlights of these include:

Additionally, the structure has become an architectural attraction in the North of Israel by Christians and non-Christians alike and an important fine art, music and cultural hub having hosted the Sea of Galilee International Choir Festival, the famous Israeli Udiana Choir and Magdalena´s Institute Fifth Women´s Encounter.

“Launch in to the Deep”

Duc In Altum draws its name from Luke 5:4 where Jesus instructs Simon Peter to “launch into the deep” or “put out into deep water.”

Want to arrange your special event? Contact us here

A Tribute to Women Who Love God and Live by Faith

Duc In Altum exalts the presence of women in the Gospel. Thanks to Divine Providence, this idea was materialized in Magdala, hometown of Mary Magdalene. Mary was a follower of Jesus among other women who supported him with their own means (Luke 8).

The Women’s Atrium features eight pillars, seven of which represent women in the Bible who followed Jesus, while the eighth honors women of faith across all time.

The honored women are listed below:

Mary Magdalene – follower of Jesus and present at his crucifixion (Luke 8:2)

Susana and Joanna, the wife of Chuza – followers of Jesus (Luke 8:3)

Mary and her sister Martha – followers of Jesus (Luke 10:38)

Salome, the mother of James and John – supporter of Jesus and wife of Zebedee (Matthew 20:20)

Mary, wife of Cleopas – follower of Jesus and present at his crucifixion (John 19:25)

Many other women – the many women who followed and supported Jesus (Mark 15:41)

With a view of the Sea of Galilee, and a unique boat-shaped altar, this chapel commemorates Jesus preaching from the boat. It has room for up to 250 people. On May 26, 2014, during his pastoral pilgrimage to the Holy Land, Pope Francis blessed the tabernacle, which resides on the altar.

One day as Jesus was standing by the Lake of Gennesaret (Sea of Galilee) the people were crowding around him and listening to the word of God. He saw at the water’s edge two boats, left there by the fishermen, who were washing their nets. He got into one of the boats, the one belonging to Simon, and asked him to put out a little from shore. Then he sat down and taught the people from the boat. When he had finished speaking, he said to Simon, “Put out into deep water, and let down the nets for a catch.” Simon answered, “Master, we’ve worked hard all night and haven’t caught anything. But because you say so, I will let down the nets.” When they had done so, they caught such a large number of fish that their nets began to break. So they signaled their partners in the other boat to come and help them, and they came and filled both boats so full that they began to sink. When Simon Peter saw this, he fell at Jesus’ knees and said, “Go away from me, Lord; I am a sinful man!” For he and all his companions were astonished at the catch of fish they had taken, and so were James and John, the sons of Zebedee, Simon’s partners. Then Jesus said to Simon, “Don’t be afraid; from now on you will fish for people.” So they pulled their boats up on shore, left everything and followed him. – Luke 5:1-11 NIV

The Public Life of Jesus

The four mosaic chapels in Duc In Altum, designed to host 30 people, are home to an expressive mosaic that illustrates events from the public life of Jesus around the Sea of Galilee. Each mosaic is an open window inviting us toward the infinite love of God in the Gospel. They are realistic representations in dialogue with the original sites and invite us to meditate the Gospel scene in its authentic context.

The first chapel facing the lake is the Walking on Water Chapel, representing the story in Matthew where Peter’s faith was tested by walking on water with Jesus. “‘Lord, save me!’ Immediately Jesus reached out his hand and caught him. ‘You of little faith,’ he said, ‘why did you doubt?’” Matthew 14: 29-31 NIV

The second chapel facing the lake is the Fishers of Men Chapel, representing another story in Matthew where “Jesus Calls His First Disciples”. “As Jesus was walking beside the Sea of Galilee, he saw two brothers, Simon called Peter and his brother Andrew. They were casting a net into the lake, for they were fishermen. ‘Come, follow me,’ Jesus said, ‘and I will make you fisher of men.’ At once they left their nets and followed him.” Matthew 4: 18-20 NIV

In the chapels looking towards the town of Magdala and Mt. Arbel, the mosaics reflect the other central theme of Magdala: women.

One of these chapels is of course the Mary Magdalene Chapel, where we remember the story in Luke of Jesus casting out demons. “After this, Jesus traveled about from one town and village to another, proclaiming the good news of the kingdom of God. The Twelve were with him, and also some women who had been cured of evil spirits and diseases: Mary (called Magdalene) from whom seven demons had come out”. Luke 8: 1-2 NIV

The other is dedicated to the daughter of Jairus. This holds great significance because she was the only woman whom Jesus raised from the dead. In this we see the Magdala messages woven together. “He took her by the hand and said to her, ‘Talitha koum!’ (which means “Little girl, I say to you, get up!”). Immediately the girl stood up and began to walk around (she was twelve years old). At this they were completely astonished.” Mark 5: 41-42 NIV

Encounter between Jesus and the Hemorrhaging Woman

The Encounter Chapel in the lower level of Duc In Altum is part of Magdala´s archeological treasure: the floor is that of the original first century market place of the Magdala port.

A port market place is about as busy a spot in any town you can imagine – probably the main metro train station or airport in our terms – where people without any discrimination rub shoulders. Given the evidence of significant infrastructure for fish processing discovered on site, it is most logical that fishermen of the Sea of Galilee, many known to us by on a first name basis, who wanted to sell their fish for export to Rome (documented by Flavius Josephus) would have gravitated to Magdala’s port. A place probably not unfamiliar to Jesus’ fishermen disciples. Jesus´ ease at sitting in his disciples boats and mingling with large crowds helps us to imagine many people encountering him in this marketplace just as He would have engaged the workers and traders 2000 years ago.

The Encounter Chapel, is dedicated to Jesus’ encounter with all of us, as illustrated by the large painting, titled “Encounter”, in the back of the chapel. The painting gives us a snapshot of the encounter of the hemorrhaging woman who tries to touch Jesus for healing (Mark 5: 25-29).

“When Jesus had again crossed over by boat to the other side of the lake, a large crowd gathered around him while he was by the lake and a woman was there who had been subject to bleeding for twelve years. She had suffered a great deal under the care of many doctors and had spent all she had, yet instead of getting better she grew worse. When she heard about Jesus, she came up behind him in the crowd and touched his cloak, because she thought, “If I just touch his clothes, I will be healed.” Immediately her bleeding stopped and she felt in her body that she was freed from her suffering.” Mark 5: 25-29 NIV

The woman represented in this chapel was looking for healing, and found it when she touched the hem of Jesus. What a miraculous and life changing encounter! Today, people can stand on the stones of the marketplace where Jesus walked and have a personal encounter as they experience the historical and spiritual presence of Christ.

IS THAT ALL?
OTHER POINTS OF INTEREST