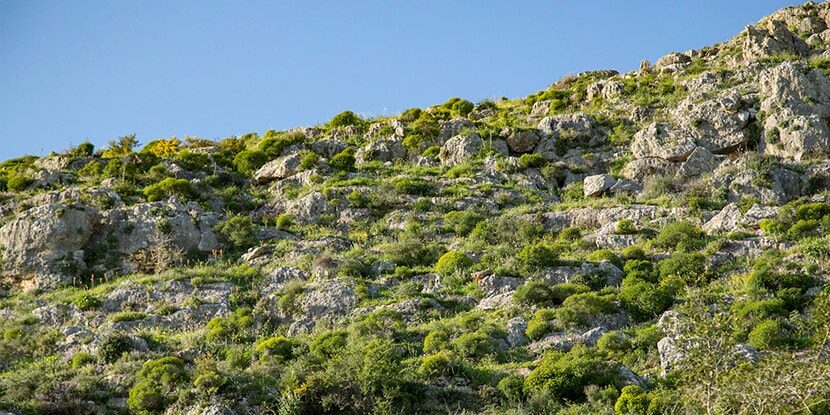 Close to the top of Mt. Arbel facing Magdala, the mouth of a large cave calls down to visitors, “come up… come up here and see!” I have heeded this invitation numerous times, making my way up rocky terrain riddled with caves that housed people at some point in history, now providing shelter for birds and bats, foxes, rock hyraxes, goats, sheep and cattle.

On a bright August morning hike a couple of days ago, I approached the remains of an Ottoman stronghold called “The Fortress”. I turned behind me to look down on the ruins of a byzantine-era synagogue and olive press across the Wadi toward the north-west, both of which once served the community that called these rocky slopes their home. I stood hypnotized trying to picture the history of this site in my mind, despite the large flow of local families on vacation trying to pass by me down the trail. I imagined myself watching the warrior Maccabees’ or General Josephus defend the area in Hellenistic and Roman times; I visualized the peaceful bustling activity around the olive press and synagogue in the Byzantine era; I imagined the castle-like “Fortress” in its glory, built into the caves by the ruling Druze lord in the 17th century. I also mused that Jesus and his apostles must have ascended this trail at some point in their travels, or that Jesus spent some of his nights in prayer on this mountain, perhaps in that sizeable cave at the top with such a majestic outlook over the Sea of Galilee. Picking my way carefully around the narrowest part of the trail, I caught myself saying out loud, “if only these stones could talk!”

In Biblical culture, stones do indeed speak – they bear witness with strong, silent and enduring voices. A few weeks ago, my community had the chance to visit Jacob’s well in Samaria. On the way north from Jerusalem, we passed by the site of Bethel where Jacob’s stone pillow acted as a conduit for his personal encounter with God in his sleep. He valued the rock so much that, “early the next morning Jacob took the stone he had placed under his head and set it up as a pillar and poured oil on top of it. He called that place Bethel…” (Genesis 28:18) Taking the desert route further north, we could easily see east into the region known as Gilead. There, Jacob piled up stones as a memorial sign of the agreement made with this Father-in-law Laban as described in Genesis 31. “Here is this heap, and here is this pillar I have set up between you and me. This heap is a witness, and this pillar is a witness…”

Earlier on our drive near Jericho, we passed a sign indicating the direction toward Gilgal. There, about 300 years after Jacob’s heaps and pillars, the Lord instructed Joshua to set up 12 stones as teachers.

“‘Take twelve stones from here out of the midst of the Jordan, from the very place where the priests’ feet stood firmly…’ And those twelve stones, which they took out of the Jordan, Joshua set up at Gilgal… When your children ask their fathers in times to come, ‘What do these stones mean?’ then you shall let your children know, ‘Israel passed over this Jordan on dry ground…’ so that all the peoples of the earth may know that the hand of the Lord is mighty, that you may fear the Lord your God forever.” (Joshua 4)

Our road trip took us across the Golan Heights toward Mt. Hermon, and we stopped to visit the ancient city of Dan, named after Jacob’s 5th son. We were greeted by the ancient sun-dried mud stones of ‘Abraham’s Gate’ which took our breath away. Uncovered in the 1970’s, it is now restored and free to proclaim history in the light of day. The seven foot high arched city entrance – the oldest in Israel – held us in stunned silence: Abram himself had passed through this gate some 4,000 years ago to rescue his nephew Lot who was held captive in this city. (Genesis 14) The tribe of Dan conquered this Canaanite town about 500 years later, and the remains of an elaborate ‘high place’ where the northern tribes worshiped a golden calf, set up about 500 years after the city’s conquest, are still visible. (1 Kings 12)

It isn’t just archeological stones that have a message to tell. The sprawling Jewish cemetery outside the old city of Jerusalem, with tombs both very old and quite new, is basically one large rock-covered hillside of meaning. The stark tombs in this tree-less area have no flowers by family names or headstones. However, the numerous piles of pebbles and rocks left on top of the graves by visiting loved-ones begs explanation.

These stone stacks symbolize many things, including undying memory, a significance that grew right out the practice of setting up stones in Genesis. The word ‘pebble’ in Hebrew also means ‘bond’, symbolizing the union of past and present. Stones placed on a sepulcher, made into a pillar, built into city gate, forming the ancient walls of a synagogue, fortress or cave, remain.  Future generations see them, and questions arise within. These rocks not only remind us of past experiences of God and His wonders, of encounters between the Lord and man, of covenants between peoples of long-ago. These stones signify how the past is ‘bound up’ with the present, with all of us here and now. These are memorial stones in the full sense of the word, described so eloquently in the Catechism.

In the sense of Sacred Scripture the memorial is not merely the recollection of past events but the proclamation of the mighty works wrought by God for men. In the liturgical celebration of these events, they become in a certain way present and real. This is how Israel understands its liberation from Egypt: every time Passover is celebrated, the Exodus events are made present to the memory of believers so that they may conform their lives to them. (CCC 1363)

Memory is supposed to be lasting, as permanent and strong as stone. Memories of God’s transformative action become like road markers in our lives. The memorial stones we collect are eventually the jewels of our eternal crown, much like the pebbles collected by ‘Much Afraid’ in Hannah Hurnard’s allegorical novel about spiritual growth became the gems of her diadem, once her ‘hind’s feet’ developed, allowing her to ascend the heights.

As we continue to live the instability that this time of the Corona virus crisis has caused, with all the devastating effects on so many people’s health and economic well-being, let us hang on to the stability and solidity of God. St. Francis’s favorite places to pray were those where he could lay against the cold hard rough rock face of deep caves. He shared with his friars that entering into rock crevices was like entering Christ’s pierced side. Francis felt he needed to feel the strength and solidity of the stone under and around him to fortify his own trust in God’s might. It reminded him of the Lord’s unwavering and permanent love for all mankind. As Jack Riemer wrote in the book Wrestling with the Angel: Jewish Insights on Death and Mourning, “in moments when we are faced with the fragility of life… there is permanence amidst the pain. While other things fade, stones and souls endure.” God’s love remains steady and strong.

Let us never tire of entering into “the clefts of the rock… the secret recesses of the cliff,” to embrace the Solid Rock and cry out in prayer for yourself and for everyone, “let me see your face, let me hear your voice!” (Song of Songs, 2:14)