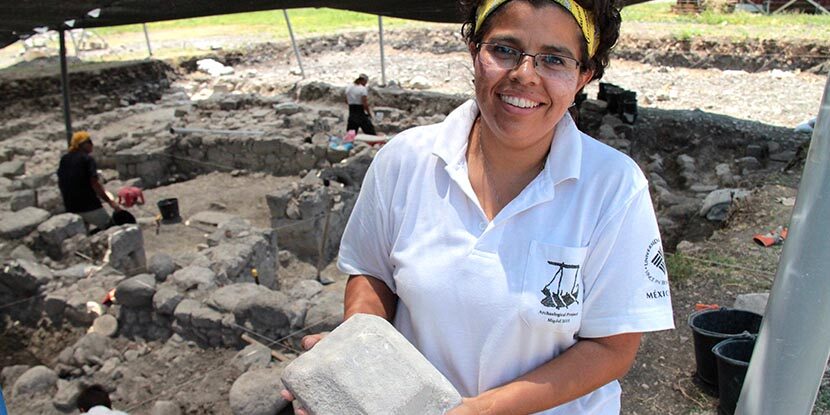 On December 12th, 2021, the Israel Antiquities Authority together with the company “Y.G. Contractual” and the University of Haifa announced the discovery of a second synagogue in the western sector of the ancient town of Magdala.

The second synagogue dates from the Second Temple period and was located in the same Magdala settlement, just 160 meters from the first synagogue discovered in 2009.

Marcela Zapata-Meza, director of the Center for Research in Ancient Cultures of the Anáhuac University, has also been director of the Magdala Archaeological Project since 2010.

From 2009 to 2019, a first-century synagogue, the Magdala stone, the market, the ritual purification baths, domestic spaces, and the port have been discovered. These discoveries have shed light on Jewish history from the time of Jesus.

We talked to Marcela about this new finding:

For the first time in the history of biblical archaeology, two synagogues have been discovered in the same settlement. Does this imply a change in the idea people have regarding the religious and social life of the Jews of that period?

It confirms what is found already in some written sources since it can be read that in large towns and cities it is common to find two synagogues. For example, in Acts 24:12, “They did not find me disputing with anyone in the temple or stirring up a crowd either in the synagogues or throughout the city” or, Acts 13:5 (ASSB no. 130) “When they arrived at Salamis, they proclaimed the word of God in the synagogues of the Jews. And they had John also to assist them.”

The settlement of Magdala is today the only place of the Second Temple period where the textual evidence of the above mentioned historic sources is scientifically proven. In religious and social terms, the discovery of this second synagogue only reaffirms what we already knew from the archaeological materials recovered in the various excavated areas: the inhabitants of Magdala were Jews, observant of their laws and traditions.

Based on the extraordinary and unique finds at Magdala to date, do you think Magdala could have been a different settlement from the cities around it?

I believe that Magdala is a unique settlement in many aspects, religious, economic and cultural:

From a religious perspective the city has two synagogues, one of them richly decorated in the Herodian style, the Magdala Stone, and four ritual purification baths (miqwa’ot)

In terms of economy, the city counted with a large port, with most of it yet to be excavated, but today we know that the basis of the economy was fishing. In the market we have discovered evidence of activities related to the production of pigments possibly used to make medicinal and cosmetic ointments. Magdala itself is a unique settlement in relation to other contemporary towns and villages in time and space.

How do you think these archaeological discoveries enrich the idea of Magdala as a meeting place between Jewish and Christian history?

They enrich the idea of Magdala, they help to understand Jewish life in Galilee in the 1st Century and this continues to provide data to understand the life of the first Christians and their relationship with Judaism in this period.

How has directing the Magdala archaeological project changed your life?

Magdala has changed my life, it has become the project of my life; I have matured as an archaeologist and as a person. It has given me the opportunity to meet extraordinary people who are now family, and extraordinary researchers from whom I have learned and will continue to learn. I cannot conceive my life without Magdala.