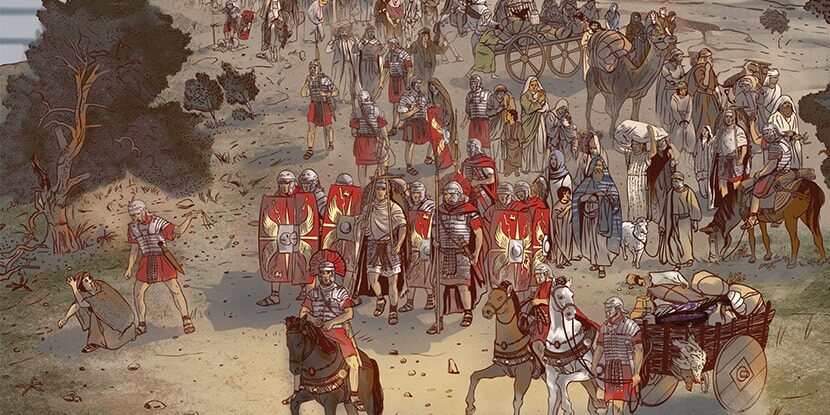 By Fr. Cristobal Vilaroig
On March 15 of the year 44 B.C. Julius Caesar died at the hands of Gaius Cassius Longinus and Marcus Brutus. Cicero himself applauded the feat: by cutting short the dictator’s career, they saved the Roman Republic. Yet, not all shared the euphoria of the conspirators: in the eyes of the Roman people, Caesar had been a hero, and when Marcus Antonius showed Caesar’s bloody garments at his funeral, the crowds roared: “Death to the murderers!” Cassius and Brutus had to flee from Rome.

Upon these events, Antonius and Octavius took the opportunity to see if they could be Julius Caesar´s successors. Nonetheless, standing against them, were Cassius and Brutus who decided to defend the Republic on the battlefield. Cassius went to Syria (a province that included Judea) to raise an army. He set his camp next to Tarichaea-Magdala. He knew of the place because ten years earlier, he had been there fighting to maintain the peace which at the time was threatened by the quarrels between the last Hasmonean (Maccabean) princes. On that occasion, he had conquered Tarichaea taking 30,000 prisoners. In the present situation, however, the city mattered little to him: Cassius’s only interest was gathering the legions that should save the Republic. A letter written by Cassius, on March 7, 43 BC “from the camp at Tariquea,” informs Cicero about how the war is going.

In the end though, Cassius and Brutus’ efforts were all in vain. Caesar’s friends would end up gaining the pulse, and Rome would become an empire under the command of Octavius Caesar Augustus. It is in these days, that the world was at last in peace, and in Bethlehem of Judea Christ would be born.