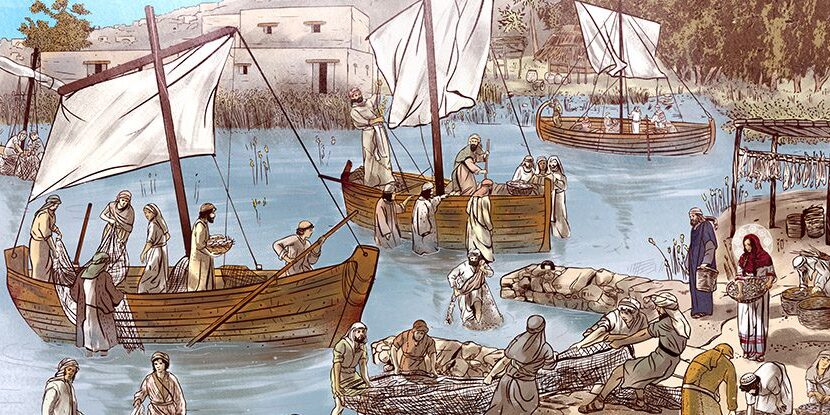 Magdala is a word of Aramaic origin meaning, “tower,” and most probably referring to a building or structure found on site. Furthermore, Magdala appears to be a name used commonly in antiquity in the region to the point where cities with this name would also have had a “last name.” This would be similar to the usage of the name “Santiago” for cities where a last name would clarify the location of the site such as in, Santiago de “Compostela” or Santiago de “Chile.”

Studies identify Magdala with a city that some Jewish texts called Migdal Nunayya, meaning “Magdala of the fish.” We know that Magdala had a flourishing and popular fishing industry, and we know it may have also been referred in other Jewish texts as Migdala Sab´ayya meaning, Magdala of the dyers.

The majority of archaeologists now think that Magdala had its own Greek name: Taricheae. It was very normal in antiquity for cities to have two names, one of Semitic origin and a Greek name. We see examples of this in Bet Shean-Scythopolis, Rakkat-Tiberias, Emmaus-Nicopolis, etc.

Taricheae means “salting/brining” and would indicate that the city was known for its salting industry to preserve fish, which matches the name, Migdal Nunnaya, meaning Magdala of the fish. Josephus, the famous Jewish historian from the first century who speaks of all the major cities of his time period does not refer to Magdala, but instead to Taricheae, which according to sources suggests to be located in the same location where Magdala is found. Hence, experts today conclude that Taricheae and Magdala are the two names used for the same city.

An experience full of challenges and blessings!
6 March 2020