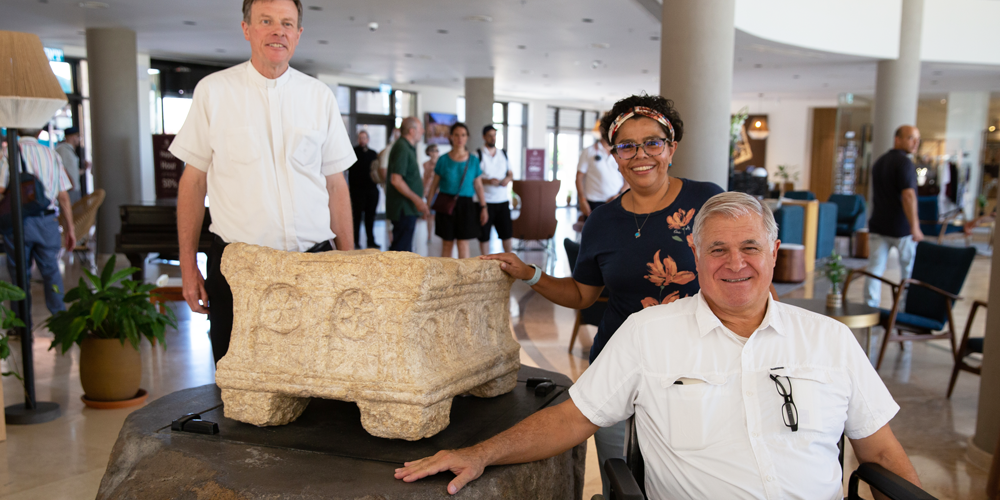 Greetings from Magdala, where in the middle of summer, we find ourselves sizzling with heat. The warm weather is accentuated as we find ourselves 211 meters below sea level. Nonetheless, even among this, we are working hard to prepare ourselves for a cooler autumn and one filled with many pilgrims wishing to visit the Holy Land.

On this occasion, I want to share with you the story of the Magdala logo, which is inspired by the rosette sculpted on the surface of the Magdala Stone. As many of you know, to our great joy, the original stone returned to us in July after more than 12 years on tour.

It was the summer of 2009. We were about to begin construction of the Magdala Center, and as a legal premise, we had to carry out archaeological excavations. These started on July 27. In those years, I dedicated my summers traveling to promote pilgrimages and raise funds for Magdala, and so I was abroad in Mexico. Every day my secretary at the time, Vicente, sent me photographs of the discoveries. In the first days, a few stones, some walls, and little else appeared in the images. Around the 10th of August, Vicente sent me slightly more serious photographs which appeared to show a built-up area…

I returned from Mexico to Israel around August 16th. I had a lot of restlessness and curiosity to know what was happening in Magdala with the archaeological excavations, but I had to spend a couple of days finalizing projects I had in Notre Dame of Jerusalem. I finally made my way to Magdala. As I drove along the Jordan Valley road and thought about Magdala, I asked God to help us find something interesting.

Here I add a premise. For years I had presented the Magdala project using aerial photographs, where I showed the archaeological zone of the Franciscans and our land on the north side. Almost every time I was asked a question, “Father, do you expect to find some archaeology?” Even Pope Benedict XVI himself asked me this question. My answer was systematically the same, “I have asked God to choose one of these two options, either we find nothing, or we find something important.”

I continued my trip through the Jordan Valley and excitedly approached Magdala. It was about six in the afternoon. I was excited at the possibility of finding an inscription, a sculpture, or something similar because I liked the idea of having a “theme” that, taken from archaeology, could be the logo of Magdala. As I arrived on site, Waseem, our security guard, received me like a child waiting for his father. He wanted to show me every stone and every angle of what was going on there. I remember that while we were walking toward the archaeological ruins, we found a coin on the floor. It was very exciting!

As we approached the main dig, the walls of a square building were clearly visible, about 40 or 50 centimeters of which had been excavated… and almost in the center, only the surface of the Magdala Stone was visible. At that time, it was difficult to guess what would be below. It was literally just the surface. I took several photos of it, which I would later show to connoisseurs of the Holy Land, trying to identify what those figures could mean. You must know that prior to this, I had never actively participated in an archaeological excavation.

The rest is history. The excavations continued, and on September 13, 2009, the discovery of a first-century synagogue, the first in Galilee of this period, was officially reported to the press. The first synagogue of Jesus´ time in the Galilee region!

In the meantime, my first photos of the surface of the Magdala stone went unnoticed… Without forgetting that of all the symbols found in the stone, the “rosette” was the most significant and most outstanding of them. It would not be until years later, when we tried to define Magdala and elaborate on all the elements of its institutional personality, that the company that worked for us suggested we use that “rosette” as inspiration. Since then, this simple but significant symbol has been used to develop the Magdala logo.

That rosette has been identified, in the context of the other symbols, as the veil of the Jerusalem Temple. Therefore, it contains a profoundly religious meaning related to Judaism, the temple, and the most sacred place of the Temple. It is also important for Christianity because the veil of the temple, according to the evangelist Matthew, “was torn from top to bottom” while Jesus died on Calvary (Mt 27, 51).

We hope that with ongoing research, the meaning of all the symbols of the Magdala Stone will be further identified, and with them also the rosette so that we can thoroughly enjoy all their expressions and beauty.

Prior to using the rosette, the Magdala Project had used another logo, which was the boat from the Magdala mosaic, also allusive to the life of Magdala in the 1st century. Yet, when the company suggested the rosette to us, I had to admit that it was what I carried in my heart that afternoon in August 2009 while traveling to Magdala. This was the first symbol that I could see with my own eyes on the surface of the Magdalene Stone. A gift from God. Simple, meaningful, precious. I am genuinely convinced that when God wants something, it is done.

As I write these lines, we are projecting the continuation of the archaeological work for the near future. I ask for your support and prayers so that we can fully understand what God wants from this vital aspect of our beloved Magdala.

With the greetings and prayers of everyone here in Magdala, we wish you a restful end of summer.