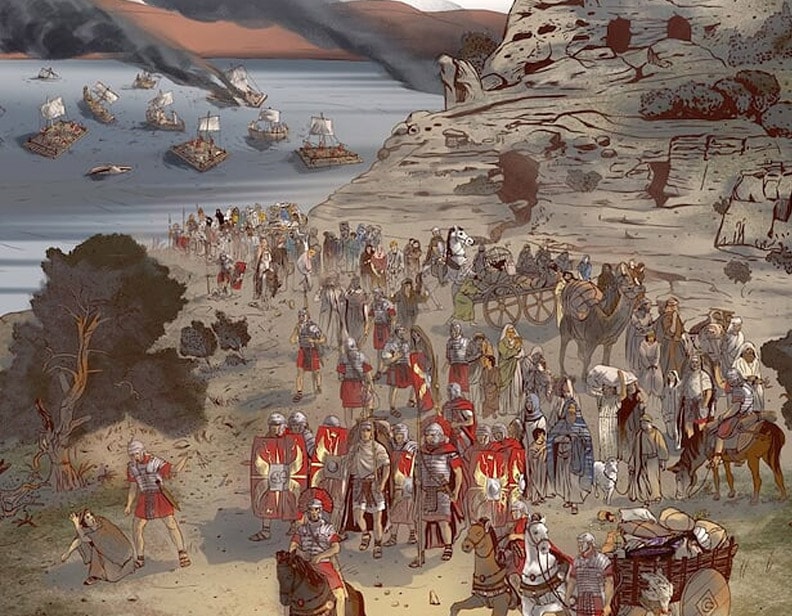 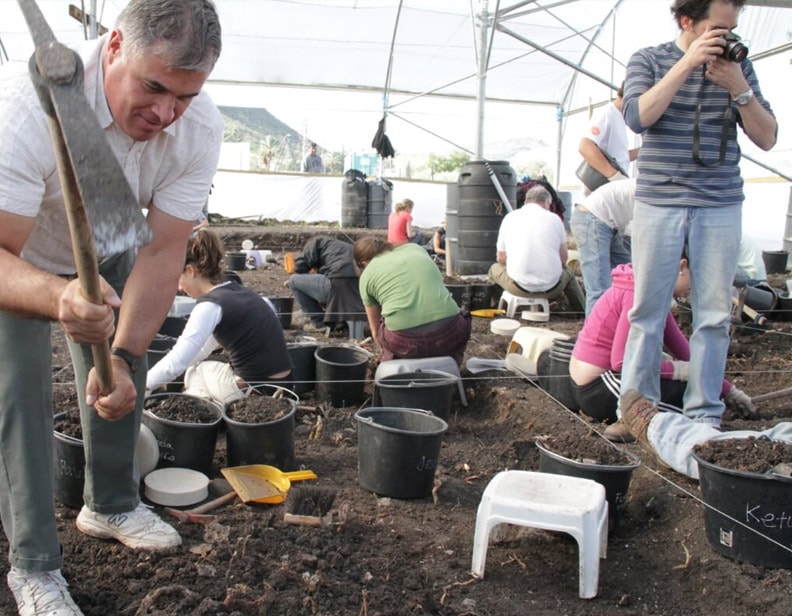 ABOUT MAGDALA
The Story

A few years ago Father Juan María Solana, LC, the papal appointee in charge of Notre Dame of Jerusalem Center, the highly-rated pilgrimage guest house, felt the leading of Christ to build a retreat center in the Galilee. From the very beginning he envisioned a place where pilgrims could enjoy comfortable accommodations in a spiritual atmosphere on the shores of the Sea of Galilee.

When construction began in 2009, no one could have imagined what God had in store. As workers began to dig the foundation for the guesthouse, they discovered a First Century Synagogue where it is certain that Jesus taught. Inside the synagogue they also found The Magdala Stone, a discovery many archaeologists call the most significant archaeological find in the past 50 years.

As archaeologists continued to dig, they discovered an entire first century Jewish town lying just below the surface. With only 10% of the archaeology uncovered, the hometown of Mary Magdalene already provides pilgrims an authentic location to walk where Jesus taught and to connect with the first century life of Jesus’ followers.

Magdala is a unique Holy Land site with a first century city where the Jewish residents gathered in a synagogue where Jesus visited and taught. It is home to the beautiful Duc In Altum, which provides a place for worship, mass, and prayer, and the Magdala Guesthouse, a unique hospitality experience for visitors and pilgrims to the Holy Land.

Because of its unique nature, Magdala actively contributes to building positive relationships with the diverse community of Christian believers and between Christians and Jews.

In the coming days, Magdala will feature an expanded archaeological park, a media enabled visitor center to showcase findings on site and explain the story of the site, and an outstanding restaurant.

Having completed phase 2 of our development we are excited to soon launch our upcoming phase to develop Magdala´s New Visitor Center! For more info click here

With only 10% of excavations completed…

The future of Magdala is really exciting but we need your help to continue developing the site! Would you like to donate? Click here to donate now

WHAT YOU NEED TO KNOW
History & Timeline

Fr. Juan’s mother had a significant life event that endeared Mary Magdalene to her. As a result, Mary Magdalene also held a very special place in Fr. Juan’s heart as he became a priest and ultimately was assigned to serve in the Holy Land.

Upon arrival in Galilee, Fr. Juan was surprised to find nothing in Magdala to honor this woman of God. It was then that he felt inspired to purchase land in the area to build a place for pilgrims to experience Jesus’ ministry.

Divine Providence had reserved the unearthing of Magdala for this moment in time. Perhaps God was waiting to speak to the people of our time through this site. In just a few short years, with only part of the site excavated, Magdala has already become a very special place of history and culture for the Jewish community as well as a holy site for reflection, teaching, prayer, and worship for all Christians, regardless of background or denomination.

With its geographical location and historical significance, Magdala is the crossroads of Jewish and Christian history, and it is destined to become a premier catalyst for worldwide renewal and reconciliation.

Magdala has a rich cultural history for both Jews and Christians. The archaeology found in Magdala holds incredible significance to the events that once took place. Magdala (near present day Migdal) is located on the western coastline of the Sea of Galilee (Kinneret) and at the eastern foothills of Mount Arbel. It is at the crossroads of Jewish and Christian history.

The site has been identified with the ancient city of Migdal Nunia which means fish tower. It was also known as Taricheae with a related meaning of the place of salted fish. It was the largest urban center on the western coast of the Sea of Galilee until the founding of Tiberias in 19 CE. The archaeological excavations have exposed a large portion of the northern quarter of Magdala primarily from the first century.

Magdala is known traditionally in Christian sources as the birthplace of Mary Magdalene. She is named at least 12 times in the gospels where she is described as one of several women traveling with Jesus and his disciples and personally supporting his work. She was one of the women who witnessed Jesus’ crucifixion and planned to tend to his body after the Sabbath. Mary Magdalene was the first eyewitness of the risen Christ and was commissioned by Jesus to inform the disciples of his resurrection. It is also certain that during his ministry Jesus taught in Magdala.

Magdala was also the home and main headquarters of the Jewish leader Yosef ben Matityahu. This leader later became better known as the Roman historian, Josephus Flavius. He was governor of the Galilee during the time of the Great Jewish Revolt (66-73 CE), and erected a defense wall around the city.

According to his historical account, Magdala became a gathering place for rebels who defied the Romans. These people were not citizens of the city, but people who came from elsewhere throughout the region.

In 67 CE, Roman forces commanded by Vespasian reached Magdala and put siege to the city. After its fall, many of the rebels fled by boat or were killed during battle in the Sea of Galilee. The Romans killed all the remaining inhabitants. Although there have been small settlements in the area over the centuries, Magdala was never reestablished. Magdala became a forgotten city, hidden beneath layers of soil deposited by rainwater and floods over two thousand years.

As the crossroads of Jewish and Christian history, Magdala has a unique past and a promising future.

Circa 40-60 BCE Magdala develops from a small village into a prosperous city known for fish salting and boat-building.

1908 Zionist Jews from Russia purchase the property from the Germans to teach Jewish people agricultural techniques. Most of the inhabitants are occupied in the farming industry. They grow olives, citrus crops of all kinds, dates, mangoes, avocados and many other fruits.

1912 Franciscans purchase property to the south where subsequently 1700 years of archaeology is discovered.

November 17, 2004 During a meditation on the site of Peter’s Primacy the idea is conceived to build a pilgrimage center on the shore of the Sea of Galilee.

January 19, 2006 Acquisition of the first parcel of land for Magdala (Hawaii Beach).

June 10, 2006 Initial major benefactors attended the first celebration of mass at Magdala for the Feast of the Holy Trinity.

August 3, 2006 Acquisition of the second parcel of land for Magdala.

March 8, 2008 The Magdala project is presented to Israeli authorities for the first time to obtain the construction permit.

September 12, 2008 The Israeli Ministry of Tourism selects Magdala to receive a grant that will cover part of the construction cost.

November 11, 2008 Acquisition of the third parcel of land for Magdala.

March 19, 2009 Preliminary approval by the Government of Israel for the construction permit.

March 25, 2009 Acquisition of the fourth parcel of land for Magdala.

May 11, 2009 During his apostolic visit to the Holy Land, Pope Benedict XVI blesses the cornerstone for Magdala.

September 1, 2009 Discovery of the First Century Synagogue at Magdala.

December 30, 2009 Construction of the guesthouse, restaurant, and Duc In Altum begins.

July 1, 2010 Archaeologist, Marcela Zapata-Meza, and her team from the Mexican universities, Universidad Anáhuac México Sur and Universidad Autónoma de Mexico (UNAM), together with volunteers from around the world, begin work to uncover the ancient city of Magdala.

May 26, 2014 During his apostolic visit to Jerusalem, Pope Francis blesses the Tabernacle now located in the Boat Chapel of Duc In Altum.

May 28, 2014 Inauguration of the Archaeological Park and dedication of Duc In Altum.

December, 2016 Magdala receives 76,157 pilgrims and visitors from 85 countries for the year. Tripadvisor awards 2016 Certificate of Excellence.

November 24, 2019 The Magdala Guesthouse is inaugurated

IS THAT ALL?
Other points of interest